AtmosAir's Bipolar Ionization Technology has been rigorously tested and proven to deactivate over 99.92% of Covid-19 in 30 minutes or less. The AirPro series of portable ionizers was designed for use in Homes, Offices, clinics, Nurseries, Classrooms, Hotel Guest Rooms, Restaurants or any area up to 100 SqM that you want to quickly disinfect and deodorize.
Covid-19 Test 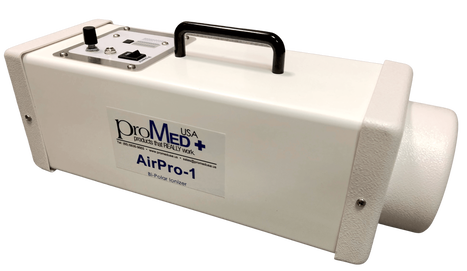 ProMedUSA AirPro-1 Portable Bipolar Ionizer with AtmosAir Technology
The ProMedUSA AirPro-1 is Asia's first portable Bi-Polar Ioniser using AtmosAir's bipolar technology and is recommended for spaces of up to 50 SqM It was designed for Home use, Nurseries, Classrooms, Hotel guest rooms, Offices, Medical Clinics, Restaurants, Gyms or any space of up to 50 SqM that you want to disinfect and deodorize.

The AirPro-1 generates powerful bipolar oxygen ions that will saturate your room, disinfecting the air that you breathe and surfaces within your room.

The AirPro-1 comes with a built in LED Electronic Timer, and a variable output adjustment control.
AirPro-1 Brochure 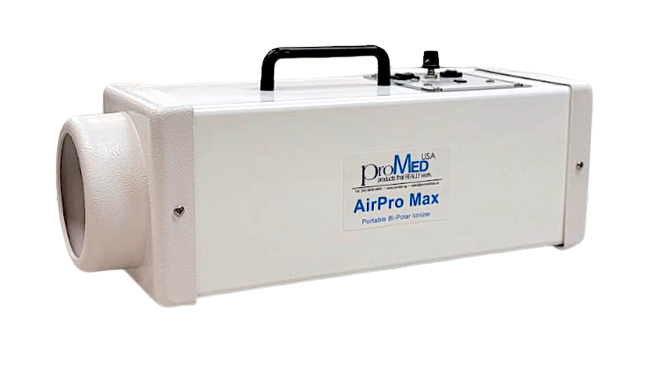 ProMedUSA's AirPro-MAX to disinfect spaces of up to 100SqM
With 2 AtmosAir Bipolar Ionization tubes, The ProMedUSA AirPro-MAX has twice the power of the AirPro-1. It weighs about 1.2KG and can disinfect a room of up to 100 SqM.

The ionization output from the AirPro-MAX will quickly and continuously saturate your room with powerful Oxygen ions, that will quickly deactivate Covid-19 floating in the air, other germs, bacteria and viruses, mould, VOC's, odours and remove smoke, dust and particles as small as PM0.3 from the air that you breathe.

The AirPro-MAX has a dual output switch, which allows you to choose a single ionization tube or both tubes to double the positive and negatively charged Oxygen ions.

Standard features also include an LED Electronic Timer and a variable output control so you can dial in exactly the ionization level you need to disinfect your indoor air and surfaces.
AirPro-MAX Brochure 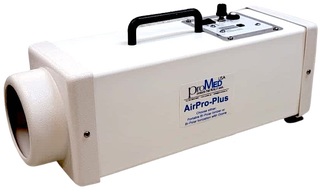 ​The AirPro-PLUS also offers the option of generating about 300mg/hr of ozone combined with AtmosAir's bipolar ionization which is extremely useful to quickly freshen a room or space, removing odours, germs, mould, etc.